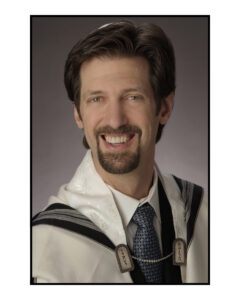 Cantor David is thrilled to be returning to First Hebrew in Peekskill for the upcoming High Holy Days. He is a devoted teacher to both children and adults at Mishkan Shalom in Philadelphia and has enjoyed being spiritual, musical, and educational leader to a wide variety of communities throughout the country for the last 15 years. Naturally, he loves to sing, especially when others join in with him. He believes that singing together anchors our spiritual intentions to each other, enhancing prayer’s transformative possibilities.

In addition to Jewish music, Cantor David loves musical theater and opera. Some of his favorite roles have been Cervantes/Don Quixote (Man of La Mancha), Leporello (Don Giovanni), and The Pirate King (Pirates of Penzance). He has sung with The Pennsylvania Opera Theater and The Philadelphia Singers. Recently, he took on the voice of the extracorporeal Cantor in the play, Cantorial, by Ira Levin at Theatre Ariel.

Cantor David holds a Master’s degree in Cantorial Studies and Jewish Music from Gratz College as well as music degrees from Temple University and Swarthmore College. He has been a member of the Cantors Assembly since 2009.

Cantor David and his husband, Bob, are proud dads of two children: Lorenzo and Miriam. You can find them doing their favorite things such as singing, swimming, biking, gardening, painting and cooking in their beloved West Philly neighborhood.